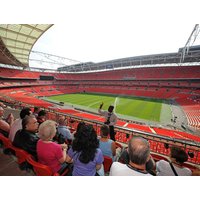 Get a glimpse behind the scenes at one of the most famous stadiums in the world on the awesome Wembley Stadium tour!

Relive some of the greatest moments in football, from England’s glorious World Cup victory in 1966 to FC Barcelona’s UEFA Champion’s League triumph in 2011, and of course the historic tradition of the FA Cup Final

This guided tour brings you closer than you ever dreamed to Wembley’s greatest treasures, like the Jules Rimet Trophy commemorating England’s World Cup glory, the 1966 World Cup crossbar, the original flag from London’s 1948 Olympic Games and many more!

What youandrsquo;ll see on the Wembley Stadium tour:

Sense the anticipation in the England team changing rooms
Feel the pre-match tension as you walk down the Playersandrsquo; Tunnel
Climb the sacred 107 Trophy Winner’s steps
Experience the high life in the Royal Box
Take Roy Hodgson’s hot-seat in the Press Room
Awesome photo opportunities from some of the best views in the stadium – donandrsquo;t forget your camera!

Even if youandrsquo;re not a huge football fan, or even a sports fan, Wembleyandrsquo;s history encompasses so many great moments including the unforgettable Live Aid concert in 1985 and many other legendary events!

Please note: from Monday 11th July to Friday 30th September, tours of Wembley Stadium will not include the Managerandrsquo;s Benches, Pitch side or the Royal Box. During this time, tours will continue to run with an amended route.