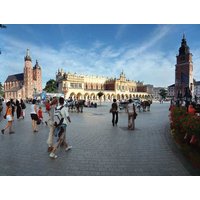 Discover one of Central Europeandrsquo;s oldest and most beautiful cities on this walking tour of Krakowandrsquo;s most important sights!

A former European City of Culture, the Old Town of Krakow is entered on the UNESCO World Cultural Heritage List.

Accompanied by an English-speaking guide, youandrsquo;ll explore the cityandrsquo;s most famous and historic areas, with lots of stories and fascinating facts along the way!

Krakow’s Jewish District: the historical centre of Krakow’s Jewish religious and social life, and home to the factory that inspired the film Schindlerandrsquo;s List.
Wawel Hill and Royal Castle: Once the residence of the Polish kings, and the most historically and culturally important site in Poland.
The 14th-century Cathedral where the coronations and funerals of the Polish monarchy took place, and Pope John Paul II offered his first Mass as a priest in 1946
Walk the Royal Route – where coronation processions, parades, kings’ receptions and foreign envoys make their way through the city. This route also passes some of the most prominent historic landmarks of Poland’s royal capital
The main Market Square: the perfect place to pick up souvenirs, particularly the Cloth Hall which has been the local marketplace for centuries.
St. Mary’s Church, with its stunning medieval altar, where a bugle call is sounded towards the four corners of the world.