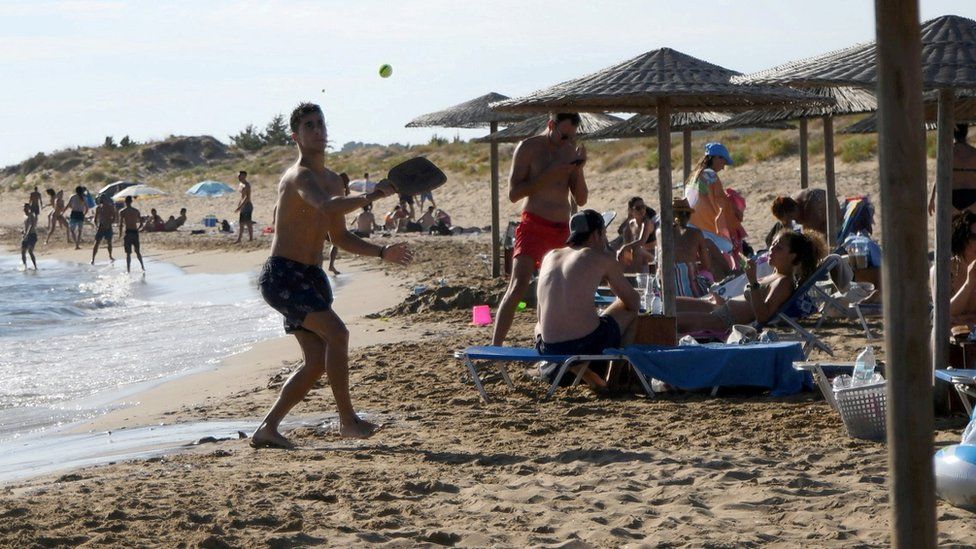 Holiday bookings have surged since the government announced foreign travel rules were being simplified in England.

And fully vaccinated people will no longer need a pre-departure test before returning from non-red list areas.

Travel firms said they had already seen an uptick in bookings and expected a busy weekend.

Travel update: What are the new rules for going abroad?
Want some autumn sun? Your travel guide to the Med
Expat’s anger at Australian travel restrictions

As part of the changes announced by Mr Shapps on Friday, eight countries – Turkey, Pakistan, the Maldives, Egypt, Sri Lanka, Oman, Bangladesh and Kenya – are being removed from the red list from Wednesday.

It means people returning from these destinations will no longer have to stay in hotel quarantine.

Mr Shapps also announced that from October travellers returning to England will no longer have to take a PCR test two days after arrival. Instead, they can take the quicker and cheaper lateral flow tests.

Huw Merriman, chairman of the Commons transport select committee and who previously criticised PCR tests for being too expensive, welcomed the rule change.

He also said it would be “interesting” to see if there would be some form of registration requirement for lateral flow tests.

Travel bosses welcomed the changes and reported an increase in holiday bookings since the announcement.

Steve Heapy, chief executive of tour operator Jet2, said there had been a “phenomenal” consumer reaction since the announcement, with “huge” demand for holidays in the next few weeks.

He added that destinations across the board were “selling well” across late summer, winter and summer 2022 dates, and the firm had seen a “surge in bookings” for family holidays during October half-term.

Thomas Cook said October half-term bookings were three times higher than in August and it expected this weekend to be the biggest of the year.

Tui also said it had seen “an uptick in bookings” for Turkey for next month, while online travel agency Skyscanner saw a spike in traffic in the 30 minutes following Mr Shapps’s announcement.

Chris Parker, director of capacity and passenger performance at DFDS ferries, said the rule changes were “better late than never” but it was a “shame” that the summer season had been lost.

He told BBC Radio 4’s Today programme there was a real collapse in bookings this year, at about 20% of 2019 bookings.

But following Friday’s announcement, there was an “immediate spike” in visits to their website and an uptick in bookings for October onwards.
Families reunited

The travel rule changes will see families and loved ones reunited.

Safina Hameed said she was “over the moon” Pakistan will be removed from the travel red list, as it means she will be able to hug her daughter for the first time in two years.

Mrs Hameed, who lives in Karachi, told BBC Radio 4’s Today programme that being separated from her daughter Shahana Minhas and her only grandson was “horrible”.

Mrs Minhas, who lives in London, said she and her husband had been cautious about Covid and wanted to wait until they and their parents were vaccinated before they considered travelling to see each other.

“But then as soon as we got vaccinated and our parents got vaccinated, Pakistan went on the red list so there went any hope of actually being able to see them finally.”

Since the announcement, she has been looking at flights to Pakistan.

“It’s literally been counting the days until we can finally see each other and things can go back to the way that they were,” she said.
‘Weaken the line of defence’

Labour has raised concerns over how the monitoring for coronavirus variants will continue amid the plans to scrap the PCR test requirements.

Shadow transport secretary Jim McMahon urged ministers to explain how it would continue and whether they planned to increase sequencing of tests.

The Scottish government said it would also drop the traffic light system but would not follow England in removing the pre-departure test requirement for fully vaccinated people returning from non-red list countries.

The country’s Transport Secretary, Michael Matheson, said there were “concerns” this would “weaken our ability to protect the public health of Scotland’s communities”.

Scotland will also not copy England in using lateral flow tests on day two at this stage.

The decision to diverge from England’s rules has been criticised by Edinburgh Airport, which said the move would “further curtail Scotland’s aviation and travel industries in their recovery”.

The Welsh government said it would consider the UK government’s proposed changes, but health and social services minister Eluned Morgan warned they could “weaken the line of defence on importing infection and increase opportunities for new infections and new variants to enter the UK and Wales”.

Both administrations said they would mirror the changes to the red list destinations.

Northern Ireland’s executive said it will follow other UK nations in dropping the traffic light system, but the proposed changes on pre-departure and post-arrival testing were still under consideration and would be discussed by ministers next week.

Mr Shapps said the measures were intended to strike the “right balance” between simplifying the system while managing the public health risk “as the number one priority”.

Airport Operators Association chief executive Karen Dee said the easing of restrictions should encourage more people to travel over the winter, but urged ministers to put support into the industry as furlough ends.

EasyJet chief executive Johan Lundgren said it was a “welcome step forward” which would make travel to Europe significantly easier although more needed to be done.
Around the BBC iPlayer banner